Gaudenz Biveroni, our alumnus from Switzerland, graduated from Institut Montana Zugerberg in 2001. He later went on to earn his degree in International Affairs and Governance from the University of St. Gallen (HSG) in 2007. Today, Gaudenz engages in linking highly qualified professionals with “Impact Jobs” at companies working on pressing issues with a professional search firm, Biveroni & Associates, and through his platform Impact Careers. Read on to learn more about him. 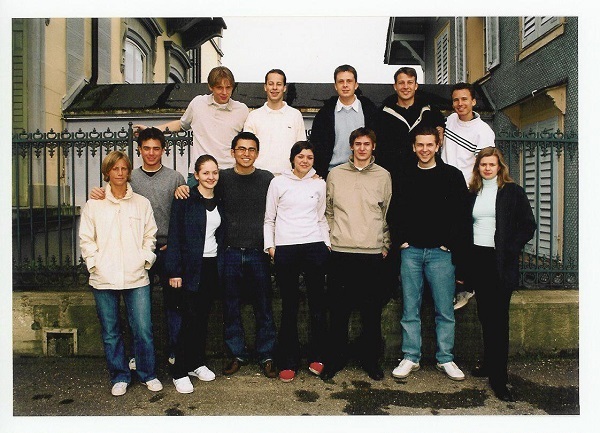 What brought you to study at Institut Montana Zugerberg?

I struggled at the public school for multiple reasons and subsequently dropped out. My parents were determined to enable me to follow a path that was right for me and had me go through a private assessment in order to get a second opinion regarding my intellectual abilities. The resulting suggestion was to study at a private school that provides certain supportive structures. So I evaluated various schools and when visiting Institut Montana Zugerberg, it was immediately clear that it would be a great place for me. The decision was heavily influenced by this school being much more international than the others schools in the radius.

Which programme did you choose to study?

Business seemed like it would be most beneficial for my future career, so I went along with this subject.

What was your favorite class and why?

Biology with Werner Edelmann. He cared deeply about what he taught, linked it to real world issues and certainly made a difference in my world view. Also, he was a good entertainer.

How was life at boarding school?

Boarding life in general probably had the biggest impact on any student at Institut Montana Zugerberg. You learn a lot from one another especially since you are together 24/7. You learn independence; setting up your own schedule, making time to eat and keeping an eye on your health. Also, in the three years that I lived there, I had a new roommate for each year: one from India, another one from China and then the last one from Russia. I had to learn to adapt to their living styles and overall personality since they were each fundamentally different from one another. Also, the perceived distances were vast compared to today. Mobile phones were not common by the time I entered the school and I had to call my parents with a pay phone found at the school. In short, boarding life was a paramount contribution to my social and people skills which I believe is rare in today’s education system and which help me to this day.

What was your favourite memory and why?

Ah, there are so many memories and it’s impossible to pick one. You go through a lot of memorable experiences. Somehow, I liked the social rituals that gave you structure, like everybody ate together three times a day with coffee and tea breaks in between. Those were nice gatherings and always a source of learning opportunities and funny stories. On the more private side, the sunsets were absolutely incredible, and I was often standing on the balcony, admiring the beauty of the sun rays piercing through the orange skies.

What is the importance of studying in an international environment?

Cultural awareness. It is hugely important in today’s global environment – for example, it is crucial to counter the so-called echo chambers that rapidly emerged through social media. The alarming rise of populism certainly has to do with a lack of cultural awareness.

If someone was considering studying at Institut Montana Zugerberg, what would you tell them?

I think this is an excellent place for talented students who thrive in social environments with certain structures (e.g. daily routine). Peer influence has a huge impact on your development at this age and a guided environment proves very helpful in setting the right priorities (and for some kids to stay in line).

Another thought is that introverts may face more challenges, since the possibilities to withdraw to privacy and quietness is limited. On the other hand, it might prepare them better for life ahead.

How did Institut Montana Zugerberg prepare you for university? For your career?

Thanks to the social and people skills acquired, I believe graduates here are better prepared for relationship building which, in my perception, is key in any career.

What tips would you give to someone looking to establish their own company?

My main advice would be to find something in the sweet spot of a) what you are really good at, b) what you are passionate about, c) what gets you paid and d) last, but most importantly: what contributes to environment or society, thus providing meaning. Regarding timing, there are a few important things to consider: Many successful entrepreneurs started practicing early and therefore failed early. This helped them succeed later on and the most successful entrepreneurs started their venture in their mid-thirties. However, especially in risk averse societies like Switzerland, it is important to have a fallback option and to make sure that an entrepreneurial failure does not hit your career development too hard. Finally, while it is exciting to get started and people usually are head over heels about this part, it is absolutely crucial to think about where the journey gets you – both in the case of success as well as in the case of failure. Because you can always earn money somehow, but you will never be able to get time back.

What is the one thing you learned from Institut Montana Zugerberg that you found most valuable?

Courage. I found myself quite often out of my comfort zone - in a healthy way - and it taught me that I can adapt to and overcome challenges.

How would you describe Institut Montana Zugerberg in five words?

Home to learn and grow.

What tips or advice would you offer to current students?

You can live a creative life or a relishing life - decide early on which one you choose and plan accordingly. If you decide for the former, gather as many experiences as possible through meaningful engagements, internships and trips abroad. Eventually, you will have to choose a direction and the more experience you have at that point, the better your decision will be. You have roughly 80,000 hours in your career. University might seem useless, but look at it as a means to a greater goal. Career success rarely begins with finding the right solutions to problems. It starts with finding the right problems to solve. Be kind, stay humble, curious and always keep an open mind.